40 Years On: Social Change in a Wiltshire Village

In the summer of 2021, I went back to the village I left in September 1980. We went on a family holiday in a cottage next to the school I used to go to. I remembered Hilmarton in the pre-Thatcherite era. This was a chance to see how 40 years of history had changed where I grew up.

My wife was planning our holiday. She wanted to go back to the Isle of Wight trailer park where we had a holiday two years previously. It was okay, it had its own swimming pool, we could go back to the decaying beach resorts, but I didn’t want to go. 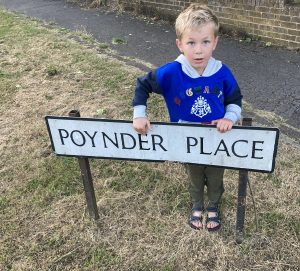 I’d just got a small legacy. I wanted to do something different. I put ‘Weird family holidays UK’  into Google and up came a list of ’13 Unusual Family Holidays’. I scrolled through and found a safari in Worcestershire, a stay in a converted railway carriage in Devon, and an eco barn in Kent.

But then I saw a historic 17th Century thatched cottage in Wiltshire. I might be able to sell that to my wife. I’d lived their as a child, and I wanted to go back and have a look around. My wife took a look. It was then I was called to deal with toddler issues upstairs, and forgot about it.

Next morning, I happened to take another look. It was eerie. The cottage was in Wiltshire, and on closer inspection, it was in the village that I grew up in.  I’d walked past it every day I went to school.

My wife said fine. We would spend six days in a thatched Tudor cottage. When I called my mother, she remembered the families that lived in the cottage. She knew Val and Geoff, the owners. They had a child the same age as my youngest sister.

Hilmarton lies between Calne and Lyneham. Lyneham used to be an RAF airbase, where my father worked as a navigator on Hercules. (It is now an army base). I moved from Ickenham near London to Hilmarton in 1975. I enrolled in the small Victorian school with about 60 pupils.

The village is a circle. You enter by passing the church and the old corner shop. Then there are three parts: the beautiful Victorian homes that date from the era of the Poynders, a Victorian family who owned most of the village, then the 1970s Poynder Place modern estate, and then a close which was council housing in my day, but had been presumably sold to tenants during the past 40 years.

We’d lived on the 1970s estate, which had been designed with some ideas about promoting community: it was open plan, provision was made for families to connect with their neighbours. There were no fences between the gardens and there were a few communal grass verges and a concrete square, where children could play.

On our holiday my first stop in familiar territory was Calne. Its contours were familiar, the shopping arcade, the river, the large Sainsburys, but the old Harris bacon factory, which was always a looming presence, had gone.

No sooner had we slammed the hatch of the car boot in Hilmarton, my wife struck up a conversation. It was a lady from the Evans family. I remember my mother told me that Mrs Evans was in tears the day that Mrs Thatcher got elected in May 1979 (as a family, we were delighted). This was her daughter walking the dogs.

On our first evening we took the children for a walk to view my old haunts. The quaint Victorian school has been substantially expanded. It was now a sprawling mixture of extensions and temporary buildings. My old playground was now a dingy enclosure. They’d built a new playground in the field.

We went to my old home in Poynder Place. The setting was disfigured by a parked camper van gathering dust. I used to play on a grass verge beside an electricity station, but the electricity station has been demolished to be replaced by garages.

My old house had had an extension. In fact, dozens of houses had had extensions. We had one car from 1975 to 1980. Now every house had two or three cars. A big difference was the trees and hedges which had been quite new in my time, had grown. The tidy minimalism had been replaced by untidy overgrowth.

The people living in my old house spoke to us. They were friendly. We stood in the front garden. We exchanged stories about the neighbours. Where there had been open grass verges, people had built fences. Common land seemed to have been appropriated by certain properties.

In the school field where I organised my cricket matches, there was now a playground with swings and roundabouts. There was also a huge rather unprepossessing community hall. 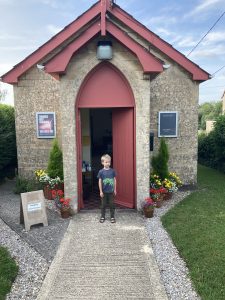 We went past the alms houses and the house where we used to buy eggs on our tour. We were staying in Breda Cottage, built in 1660. It was the idyllic image of Hilmarton. In the 1970s it had been owned by a Formula 1 designer. Though the picture postcard views were rather spoilt by the cars.

Opposite the cottage where we were staying there was a Baptist chapel. I remember attending a Thursday club which was a kind of Sunday school.

During the pandemic this beautiful small chapel had been transformed into a place where people could exchange books,  DVD, cuddly toys. My children loved it. We met the person responsible for it, Mrs Sparrow. I had known the Sparrows and we reminisced with the mother saying her daughter would be interested in getting back in touch with my sister.

We had some nice chats with Geoff. I lamented the decline of Poynder Place. The overdevelopment. The fences. The increased number of cars. I remembered we walked to school and back on our own from the age of seven. Because the school had a good reputation, children came from further afield, that meant the school gates were now characterised by traffic jams.

The pub wasn’t functioning while we were there (this was still during the pandemic); in my era, I’d never been to it, but it had been another community hub: a very distinctive WI hut had been where I had taken part in beetle drives as a child. This had been demolished and the money from the plot had paid for the new community hall.

Geoff had commuted to London from Hilmarton until 2005, when he bought the next door property and let it out as a holiday let. His commute was well over 2 hours each way, every day. Quite a life.

The village shop, which had been a mainstay of my life as a child, with a Post Office had closed around the turn of the century. If you needed a pint of milk you had to go to the Tesco hypermarket in Calne.

We went to the Sunday service at the Anglican church. There was a lady vicar who lived in Poynder Place. I asked the vicar if there was still real poverty in the village: my mother would take clothes to some of the children who lived on the farms. The vicar said that wasn’t really still the case.

We had a good time visiting Marlborough, Trowbridge, Swindon and Chippenham, the children particularly enjoyed Bowood Estate with its exotic climbing frames. But the visit gave me some melancholy reflections. Economic growth undermines social cohesion. The car culture, the fear of crime, the desire for control, economies of scale, they have undermined village life. I asked how much immigration there was in Hilmarton, the response came back not much. Maybe some ethnic diversity could have added another dimension to the village.

But I do advise you to go to a Tudor cottage on holiday. Because when you come home every room in your own home feels enormous.