These are weird historical times. I like to keep snapshots of how we’re managing transitions back to more ‘conventional’ reality.

On Sunday 19 September 2021, I spent the first night away from my family for over two years.

I had a book I wanted to consult in the Bodleian Library in Oxford. I decided to take the coach from Bournemouth to Oxford (the rail timetable seems to be unrecognisable from what it was before the pandemic). Rather than travel for five hours in one day, I decided to book bed and breakfast in Christ Church college. This was a bit eerie because two years earlier in September 2019, I’d stayed in the same college for an Anglican Festival of Preaching. For me, this visit would bookend the two year interval that was the ‘pandemic’.

It felt strange. I had to pack an overnight case, which meant digging out my grubby washbag from under the bathroom sink. What I found pleasing was the need to dress up a bit. Opening my wardrobe, I connect with some emotions associated with the past 18 months. The different moods that come from different clothes have been closed off. I’ve only worn my suit once in the past 18 months. I’ve hardly been out of my jeans. I’ve rarely worn a shirt. I found my formal black shoes under an armchair in my study. They were thick with dust. I gave them a clean and I was pleased to hear the familiar click of my heals on hard surfaces. 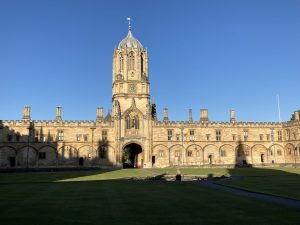 I got on the coach and plugged in my earphones. I was amused by a small dilemma that predated the pandemic. The driver says we must wear a seatbelt, but lots of passengers don’t bother. Some people were wearing masks, but many weren’t. Two young female students got on at Southampton wearing masks that resembled lingerie. I wondered whether some British women now see masks as Muslim women see the veil, a way to avoid attention or not wear make-up.

On my arrival, I walked through a city bathed in sunshine. There was al fresco dining. The Nosebag had set out chairs and tables in St Michael’s Street. There were a few neglected shops, but the centre seemed to be buzzing.

I had to check in at the lodge in Christ Church. The door was locked, the porter had a mask, and I was obliged to stand on stickers reminding me to keep 2m distant. Oxford was still enforcing regulation, while in Bournemouth, we’ve given up. I found my room and then went to meet my friend, M.

M. is in her 70s. I’ve known her for over 30 years because I’d been friends of the family since before her divorce. M. was wearing a mask. ‘You’ve put on weight’ she said kindly. She was skittish taking her mask on and off. ‘Brian, you don’t believe in coronavirus then?’ I explained how I’d had it, and it passed within two weeks. It was unpleasant, but I didn’t consider it worth upending civilisation for. We went to itsu, which had seating outside. In conversation, I noted that there’s a real danger that when you get to a certain age, you become entirely preoccupied by your health.

In the morning, a catering assistant in the college asked me to wear a mask in the almost empty dining hall, I just said I was exempt, and she gave up. The breakfast of mushrooms, tomato, poached eggs, bacon and sausage was divine. I’d texted my Harry-Potter-mad son to say where I was (The dining hall features heavily as a set in the films). I admired the raw celebration of power that the dining hall portraits exuded, with Elizabeth, Henry VIII and Wolsey taking centre stage behind High Table. 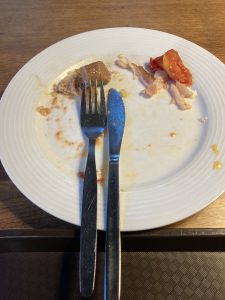 I then went for a walk around Christ Church meadow, before heading out to get my new Bodleian library ticket.

I noticed there were businesses that had gone bust. The Oxford University Press shop on the High Street had closed, so had The Mitre pub.

I met my old German teacher from school, who I’d been sparring with over email for the past year. He was a denizen of North Oxford. He wasn’t going to shake hands and he’d insisted that we sit out on the terrace of then posh café on the High Street called Quod. It was a fun conversation. I told him about my upbringing as a Christian Scientist, and how difficult it was for me to comprehend the reaction to the pandemic. He was fully signed up with the NHS, and had no problem at all with his grandchildren being vaccinated.

I met up with a third friend in the Westgate Centre, the retail palace that is sucking all the commercial activity out of the ‘old’ town. G. was very relaxed, I had to lift him out of one of the deck chairs that was on a synthetic lawn outside John Lewis.

He explained how during the previous year his son had had an awful time studying at an Oxford college. He was basically locked up in a room for a year. His father had spent the whole of the long vacation persuading him to go back.

G. was planning to write a new book and we agreed, his old comedy routines weren’t going to work any more. There’s been a cultural shift during the past 18 months.  That  a cause for optimism. It means there’s scope to reinvent things.

We didn’t talk directly about the pandemic. We just marvelled at what a mess Australia had got itself into.

I bumped into another teacher from my old school on Cornmarket. He told me how much disruption there had been in the school. He also tutored for pupils in the state sector and he said the neglect of pupils had been terrible.

I then had a glorious to walk down Broad Street in the sunshine to Blackwells. It felt as if I was 16 again.

I wanted to look at the foreign language section, to find some familiar books in French and German, but I couldn’t find it at first. After a fashion, I discovered the section had shrunk from half a floor in my day, to a few bookcases.

I went back to Christ Church to pick up my overnight bag and then I went for a cup of tea and read a book before getting on the coach.