I have an image of Les in my head.

With a pint glass held close to his chest.

And then laughing loudly.

Les had many lives,

I want to give you a taste of some of them today.

He wanted to do his own thing well.

He ran a recruitment consultancy and took the process of finding the right person for a job very seriously. A suited and booted Les, was a formidable sight.

Les was an organiser.

He poured all his energy into making Athenians – his public speaking club – thrive.

And it did. Weekly meetings. High attendance.

Because he didn’t like boring and conventional meetings he put on a Controversial Evening.

About politics and religion.

And it was controversial, but fascinating.

Les got into trouble with the powers higher up.

That was a pattern. It discouraged him and he moved on after that.

Les was a still speechmaker.

Anyone who got stuck with him on the phone can testify to that.

It was not unusual for him to launch into a 30-minute monologue.

You’d struggle to get a word in edgeways.

Finally, you’d have to cut him off rather brutally.

But he would just say. ‘Right-oh’, and not take offence.

Les was an amateur pilot.

He flew me to Le Touquet in France.

Had a slap up lunch.

Walked along the beach.

Picked up his tin of cassoulet.

I remember the flight home.

There we were,
high in the air, on a glorified lawnmower
looking out at the breathtaking green patchwork of Kent.

I can understand why he went through all those diets to keep that going.

Les was an IT man.

There was something very 1970s about Les.

If Reggie Perrin did websites, they would look like Les’s.

He had a few cartoons, that would pop up over and over again on his stuff.

When the recruitment dried up, he decided to make a business of what he’d been doing anyway – fixing other people’s computers.

Les was a loyal and funny friend.

Whenever you started a new event, or needed some moral support, he’d be there.

He’d review your book on Amazon, and give it five stars.

I went back and looked at his reviews on Amazon.

I found the one for Astonish Tea/Coffee Stain Remover.

His review was titled: Truly Astonishing.

He went on: This stuff really lives up to its name.

So much better than soaking your mugs in bleach.

Les was a sensitive man, who was willing to help.

I remember a writer saying that writers bring pleasure,
but someone who unblocks your drains gives more pleasure.

Or got a new bit of kit.

And it wouldn’t work.

You’d be stuck, facing the prospect of spending hours on helplines.

To hear that Les was on his way to fix your computer was like knowing someone was on the way to unblock your drain.

He’d come round and two hours, four hours, six hours later.
Having drunk lots of tea, he’d get your system up and running again.

He loved his flat.

He loved having guests round to watch the fireworks.

Or to show them the flypasts.

He loved surveying London from on high.

I’m sure Les has gone to the Lauderdale Tower in the sky,
where he’s settling in very nicely.

He’ll be soaking his mugs in Astonish,
and rerecording his own jingle as an answer phone message.

Please leave a message after the beep: MMMMMMMMM. 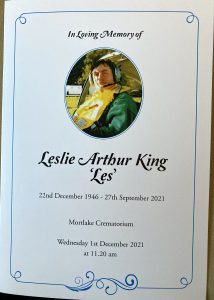