My first client as a speechwriter was Peter Sutherland, when he was Chairman of BP. I was summoned to his office for a 15 minute interview. During that interview he rummaged in his desk drawer and got out his commonplace book.

It was a notebook in which he scribbled anecdotes which made the points he wanted to make in his public pronouncements.

I remember he read out one illustrating the fickleness of public opinion, by showing how the newspaper headlines changed as Napoleon escaped from the island of Elba and made his way to Paris. 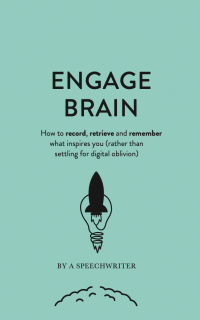 The cannibal has left his lair.
The Corsican ogre has just landed at the Juan Gulf.
The tiger has arrived at Gap.
The monster slept at Grenoble.
The tyrant has crossed Lyons.
The usurper was seen sixty leagues from the capital.
Bonaparte has advanced with great strides, but he will never enter Paris.
Tomorrow, Napoleon will be under our ramparts.
The Emperor has arrived at Fontainbleau.
His Imperial and Royal Majesty entered his palace at the Tuileries last night in the midst of his faithful subjects.

Sutherland was much in demand as a leader, he was a European Commissioner, non-executive director of Goldman Sachs, a founding Director-General of the World Trade Organisation, as well as Chairman of BP.

One of the reasons I imagine he was a popular choice for these posts was that he was a genial guy. He could tell a joke in a meeting or at a conference. He certainly impressed me as a nervous and inexperienced speechwriter.

Since then I’ve discovered lots of politicians and business leaders keep commonplace books.

It took a few years, but there came a point in my speechwriting career when I decided I needed to have a system. I now take the practice very seriously. I’m always curating one-liners and anecdotes. Every Christmas I publish a Christmas collection of topical quotations.

During lockdown I made a study of the subject. I’ve published a short booklet explaining how writing down and labelling those ideas and extracts that strike us as memorable can enrich our creativity.

Engage Brain – how to record, retrieve and remember what inspires you is available for £4.99 + £1.50 p&p if you email me your address and can make a payment by BACS.

If you want to get a copy in Europe the cost is €10, including postage and packing. If you email me your address, you can make a payment in Euros through IBAN.