I recently re-read Robert Cialdini’s book Pre-Suasion (Remember Cialdini? The Professor who wrote Influence) where he talks about designing our workspace with cues to support what we’re doing.

As he puts it: We have to become interior designers of our regular living spaces, furnish them with features that will send us unthinkingly in the directions we most want to go in those spaces.

Even before I read this book, I had been conscious that if I was going to specialise in speechwriting, I need to invest in props that enhanced my credibility.

My first big investment was a lectern for my office. I got it branded with my own logo. 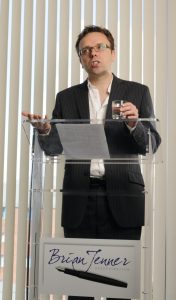 It made sense because speechwriting is about performance, and to this day, when I finish a script, I go to my lectern and I read out the speech. Then I edit accordingly.

Many times I will also record the speech on my phone and play it back to myself. I don’t see how things could work differently.

If you were a playwright, the flaws in the text do not become apparent until you’ve heard it delivered by actors. If you’re a speechwriter, the repetitions, the awkward words and the overlong sentences only emerge when you read it out.

But Robert Cialdini has a more mystical strategy for improving your work.

In Pre-Suasion Cialidini describes how he was writing a book. He wrote some of it on campus, and some of it in a hired apartment.

On campus he was in an office surrounded by filing cabinets and scientific publications. He was overlooking imposing university buildings.

In his hired apartment he was looking out at pedestrians streaming past. It was a homely environment with a TV, magazines and newspapers.

He noticed that the passages he wrote in the apartment were far more appropriate for his target audience than the ones he wrote on campus.

He believes this was because, on campus, he was led by cues that encouraged an academic approach, while in the apartment, his surroundings helped him find the tone of popular scholarship he was seeking.

I first read Pre-Suasion in 2017 when it came out. 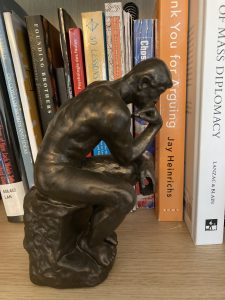 Cialdini wrote that if you want to be more analytical and thoughtful you should invest in some cues like a statue of Rodin’s Thinker and place it in your workspace.

Deliberation is part of my job as a speechwriter. So I invested in one.

I also bought a bust of Cicero and a cuddly toy of Shakespeare.

When I found Cialdini’s book again recently, it did occur to me that I have read lots of Cicero and Shakespeare in the past few years.

Lots more than before I invested in my ornaments.

So maybe it works!

For that reason I decided to take it further.

I did an internet search to find a picture of an audience.

After all, that’s the most important thing for a speechwriter to focus on.

I found a print on Etsy. I was pleased with it. I got it framed.

This audience is edgy, alternative and downright weird. But I thought: yes, that’s what I want.

But is that ever the case? 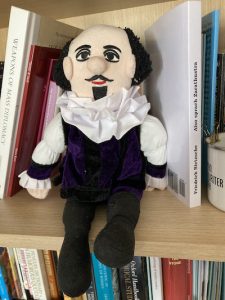 I have a picture in my head of ‘humanity’, but if I’m on the top deck of a bus, if I’m at the school gates, or if I’m sitting in McDonalds during Sunday lunchtime, I look around and realise I may have a very distorted picture of humanity in my head.

My expectations are far too high.

This print, which now stands next to my desk, reminds me of what I’m really dealing with: complex, diverse people from many different faiths and cultures stretching from the young to the old.

Communicating with them is never going to be easy, but staring at the motley crew while I’m thinking, and glancing up at them while I compose, keeps me humble.